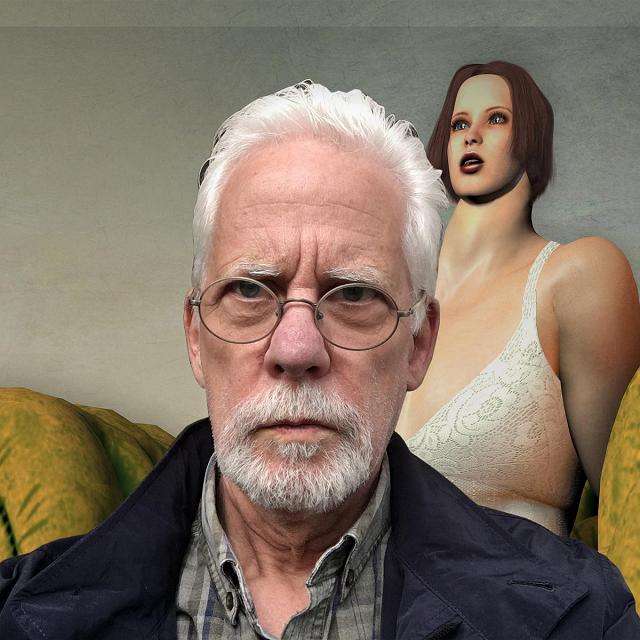 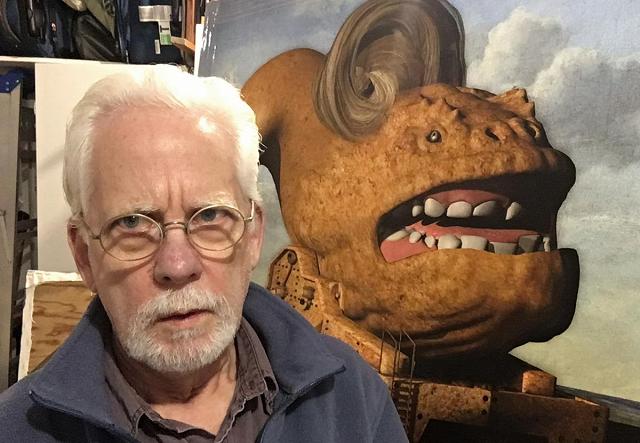 The artwork of Canadian surrealist, Don Bergland, is strangely unsettling in a bemusing, eerie, and theatrical manner. Mannequins, waxen simulacra, automata, and puppet-like figures are posed within theatrical spaces, dramaticially blurring the boundaries between animate and inanimate, human and non-human, life and death. Basing his aesthetic manifesto in the Freudian concept of the "uncanny," he creates work which attempts to gently disrupt the normal fabric of reality in order to dramatize the themes of consciousness, existence, exile, and human mortality. There is a sense of recognizable reality in his artwork, but it is a reality that is theatrically artifical and mechanically postured. This is both intentional and purposeful. For Bergland as an artist, it is a twofold reinterpretation of reality. In an act of improvisational choreography, he first invents his basic set in a 3D program, using models, until he can photograph this structure. From there, he moves the photograph into a digital painting environment where he prepares the visual exposure for performance, trimming edges, painting textures, and constructing overlay washes of dark and luminous historicity, until his personal statement is realized. This is a work based on a simulation of reality, as his studio pipeline guarantees, suspending reality in the theatre of preconception brought to the event by his audience. Bergland specifically uses these techniques and process to make his figures "un-lifelike," while helping them retain a human similarity that allows them to become friends, giving them an eeriness impossible to capture in photographic human representations

Don Bergland has spent over fifty years working in the visual studio and has moved through many visual styles in his art production. For the first twenty years of his studio life, he worked as a traditional painter creating large interpretive works on canvases. He now finds himself working with digital tools and techniques, focusing on an integration of 3D modeling software and various graphic processing programs in order to construct a theatrically surrealistic language that integrates the viewer in a participatory dialogue in unpacking meaning from visual imagery.

Bergland describes his current work as theatrical surrealism with the objective of eliciting questioning attitudes in the mind of viewers. For Bergland, the enclosed space of the visual image is a dramatic cerebral theater populated by realistic sets, objects, and figures which when combined with intention, offer challenging mental puzzles. Walking a thin tightrope between the obvious and the absurd, he constructs sets which host small dynamic dramas based on the mind’s ability to build meaningful narratives from enigmatic sources. The resulting images are to be seen for what they are, and then for what they may not be.

Each of Bergland's artworks features a theatrical set defined by a stage with actors, props, and a backdrop. The actors in the set consist of everyday objects brought into combinations and interactions that attempt to elicit inquiry. The content of the artwork focuses on themes such as time, aging, nostalgia, the footless pursuit of Utopia, and the conditions of ideology which disable our rational minds. Each image is constructed using conventions of visual realism, but with alterations that offer dreamlike possibilities. Themes and objects appear and re-appear from image to image. Each artwork becomes a framed snapshot of a moment in theatrical space, noticed briefly, and then forgotten once more, a fraction of time when reality is breached and a frozen glimpse into the mental theatre of eternity is experienced, an opening when the viewer can catch the faint hint of cotton candy breezing in from the sideshow midway, the pastel moment of a lost memory, a slight reminder that the future is never absent, and that the past is always in front of us.

Although Bergland arranges his objects in specific ways to express his own ideas, he is fully aware that the way the imagery is designed will lead to a multitude of different interpretations. For the careful observer, directional maps are suggested in each image. These maps are woven into the location, pictorial relationships, and surface appearances of the actors in each composition. Bergland intends that the viewer will engage with the work, note surfaces, relationships, symbols, and metaphors, and will then construct personal meaning from the engagement.

Like all studio-based languages of imaginative possibility, he has merely begun the journey of building and refining his own visual syntax and grammar of cerebral imagination. Each of his works is a record of that journey.

Don Bergland is a surrealist artist living and working in Victoria, Canada. He holds an M.A. and Ph.D in Visual and Performing Arts from the University of British Columbia and is an Associate Professor Emeritus of Digital Arts at the University of Victoria, where he was a faculty member for over thirty years. Here, he introduced innovative programs in digital creativity and studio performance while developing the unique style of artistic expression he calls theatrical surrealism, a method of exploring psychological oddity while using surrealistic techniques for the expression of themes such as human existence, reality, mortality, and eternity.

Inspired by his artist father, Bergland immersed himself in the visual world early, winning his first painting award at the age of twelve years old. He distinguished himself in high school with his editions of satirical cartoons published in the school newspaper, winning recognition from Len Norris, the famed political cartoonist of the Vancouver Sun. As far back as 1963, his illustrated work shows him playing with themes of oddity and dark humor. His early years were spent conducting street exhibitions, making commercial art, managing an art gallery, and working as a display artist in a department store, all while trying to discover a personal style of painting which embodied his love of mental oddity. His fascination with the human mind led Bergland to pursue studies in classical philosophy at the University of British Columbia where he pursued a degree in Classics with a major in Greek Presocratic Philosophy. Here he began to understand the basis of psychological aesthetics and used this knowledge to start building the elements of a personal style. After graduating, he spent a number of years teaching in the public school system while building his exhibiting career.

In 1985, he returned to graduate studies in visual arts at the University of BC and discovered the use and practise of digital tools in image production. As a research assistant in a large academic research project, he used very early computing tools to design sequences of visual elements for use in perceptual research studies. He later carried this learning into more creative work under the mentorship of noted digital composer, Theo Goldberg in the then esoteric and underground digital studios in the basement of the university.

Bergland received his Ph.D in visual aesthetics and joined the faculty at the University of Victoria as a Professor of Art Education. He immediately began building a digital studio as an adjunct to the traditional studios in the department. Here he developed a variety of programs for artists in helping them achieve mastery of digital tools and processes. In order to enhance his understanding of how artists in industry used these digital tools, he began a program of consultation which allowed him to work and learn extensively in digital industry, first as the Director of Visual Art for Electronic Arts, the world's largest video gaming company, and then through the years to large projects with a variety of graphic arts, entertainment, and interactive companies. At this time he also served as adjunct professor at Leslie University in Massachusetts, where he travelled around the US, delivering courses and workshops in digital art studio practise.

At this time, Bergland began converting his tradtional style of painting, using acrylic paint on canvas, to a style which used only digital tools and processes. He began achieving early success with this practise which then evolved into his current style called the Sideshow Style. He began exhibiting extensively in international juried online exhibitions, where he began to introduce viewers to his unique style. At this time, Bergland's work focused on motifs of dark psychological oddity constructed in sideshow-like theatrical settings. He began attracting an audience and his schedule of international exhibitions expanded. Don's evolution through the complexities of both this style and its manifestion through digital processes has allowed him to create theatrical narratives which explore the darker existential questions of human existence.Don Bergland maintains an active international exhibiting career and has featured his artwork in over 200 major exhibitions throughout the world. He has won over 80 creative & professional awards for his work. His work is represented in major corporate and private collections such as the Gulf Oil Corporate Collection (Alberta), the Madrona Centre Permanent Collection (B.C.), the Canadian Utilities Corporate Collection (Alberta), the Timothy Eaton Foundation Collection (Canada), the Chevron Standard Corporate Collection (Alberta), as well as in private collections in Canada, the United States, and Europe. His current focus is in using 3D modeling environments to create surrealistic imagery for international exhibitions. He currently lives and works in Victoria, BC, Canada. 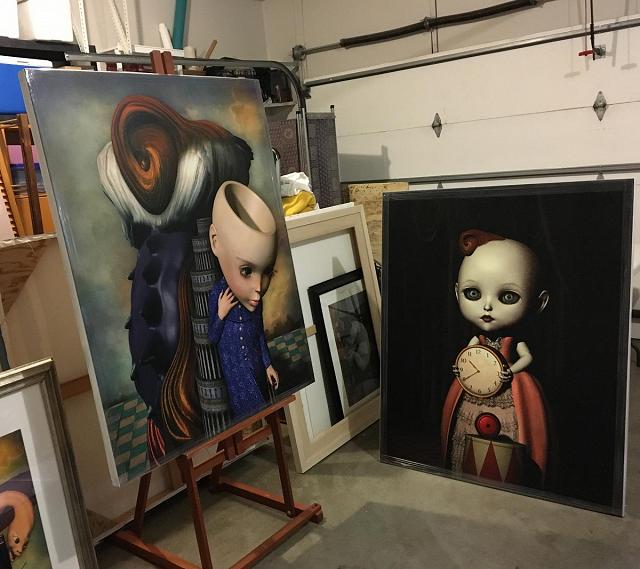 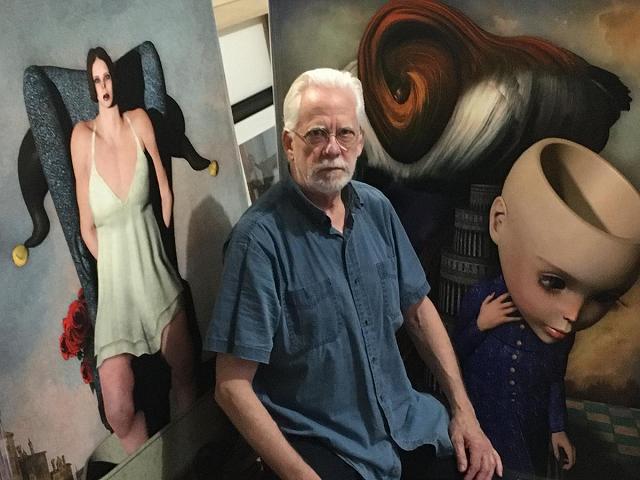 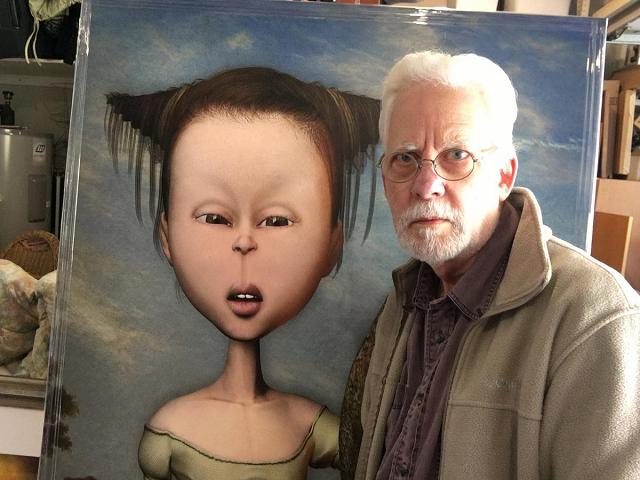 No. 1 - Bergland has attracted an international reputation for his odd characters, a sequenced collection of work that focuses on theatrical mannequin-like figures who posture in self-reflective attitudes of existential anxiety. These are purposefully unsettling in their aberrations and especially in their associations with other visual enigmas. Bergland describes the predominant narrative of his artwork as one of simulating uncertainty inside questions of exile, belief, and mortality.

No. 2 - Don Bergland's psychologically shaped images of quizzical figures, clearly puzzled as to how they find themselves where they are, may be thought of as aesthetic warnings against the adoption of meaningless beliefs. Every figure in his work is posed so as to communicate the intensity of this primal intention.

No. 3 - Bergland's characters seem to be caught in moments of intense confusion about their presence, their being, their identity. They act out arranged postures through articulated visual scripts. But there is no action. The only thing poised to happen in these theatrical dramas is the offering of a question, a query, a quizzical lament. Something is about to happen, but it is all entirely mental.

No. 4 - Don Bergland's surreal representations of figures with distorted forms partakes of the established rhythm in new contemporary art. But there is a signature atmosphere in his work that is unique to the existential directions his philosophy leads us towards. Deeply influenced by the mechanics of posture present in the Baroque and Victorian eras, Bergland's figures meet the viewer in a segmented territory in front of the stage. Actors and viewers are caught in an intrigue of oddity, waiting each other out. Who will ask the question first? The figures are reclusive, solitary, yet burning with the intensity of a graven curiosity, silenced by the weight of an eternity that remains unknown and silent.

No. 5 - There are no villains or heroes in the work of Don Bergland. There are only martyrs to a haunting demand for existential awakening.

No. 6 - With a unique style of composition and figuration, Bergland uses comfortable balance systems to host unsettling suppostions, open-air theatrical stages to enact cosmic dramas, and modelled facial expressions to proclaim a righteous agnosticism in the face of existential oblivion.